News report
20 September 2016
In collaboration with the Press Association

More than a quarter of Scottish children are either overweight or obese, according to new national figures.

Data released today from the Scottish Health Survey revealed that 13 per cent of children were overweight in 2015, and 15 per cent were obese. 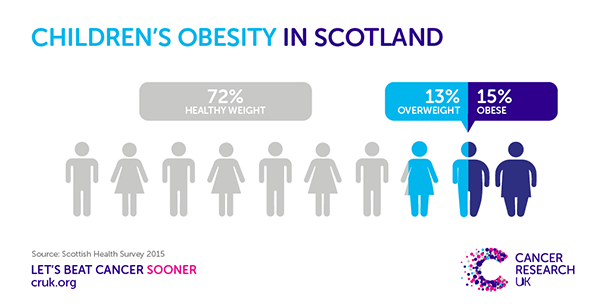 The figures were even higher for Scottish adults, with 36 per cent overweight and 29 per cent obese.

Obesity is the UK’s second-largest single preventable cause of cancer after smoking.

And with the Scottish Government aiming to launch a diet and obesity strategy next year, Cancer Research UK has said that junk food advertising and price promotions are among the issues which need to be tackled.

“If left unchecked, obesity will lead to a rising tide in ill health, including cancers, and become a crippling burden on the NHS" - Professor Linda Bauld, Cancer Research UK

The charity has called for junk food marketing to be restricted, along with price promotions and multi-buy offers on unhealthy food.

And it says funds generated by the proposed Soft Drinks Industry Levy or ‘sugar tax’ should be spent on measures which are designed to tackle obesity.

She said: “The number of children who are overweight or obese in Scotland is shocking. This is a huge worry for the health of the nation.

“If left unchecked, obesity will lead to a rising tide in ill health, including cancers, and become a crippling burden on the NHS. The Scottish Government must take steps to protect youngsters from being bombarded by junk food marketing on TV, as well as the barrage of supermarket multi-buy offers on sugar and fat-laden food and drinks.”

According to official data, Scottish households spend more than any other UK nation on soft drinks, at £2.60 per week compared to the British average of £1.90 per week.

Professor Bauld said this also needed to be addressed urgently, adding: “Scots have a bigger thirst for fizzy drinks than anywhere else in the UK and so we need to see the benefits of the promised tax on sugary drinks as soon as possible.”

“We want to help give children the best start in life and reduce their risk of developing cancer in their lifetime. Measures to help us enjoy a better diet can make it easier for us all to stack the odds of not getting cancer in our favour.”

Public Health Minister for Scotland, Aileen Campbell, confirmed to BBC Scotland that the government is committed to launching a new strategy for obesity, along with other public health issues such as alcohol.