News report
18 May 2016
In collaboration with the Press Association

Wales has missed its cancer treatment waiting time target for the ninth financial year in a row, according to new figures released by the Welsh Government today.

Since records began in 2007, over 5,500 patients in Wales have waited over two months for treatment following an urgent referral for suspected cancer. 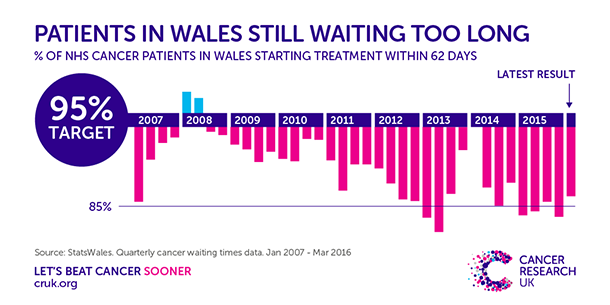 The target is to have 95% of patients suspected of having cancer start their treatment within 62 days of an urgent referral from primary care, for example via a GP.

"It’s unacceptable that the 62 day target for urgent suspected cases has not been achieved across Wales in any quarter since June 2008" - Anneka Hughes, Cancer Research UK

Waiting times are a barometer for how well cancer services are doing and the pressure they are under.

Referrals are increasing in part because of a major focus on diagnosing cancer earlier, which has been supported by new NICE guidelines introduced last year that have led to more urgent referrals. 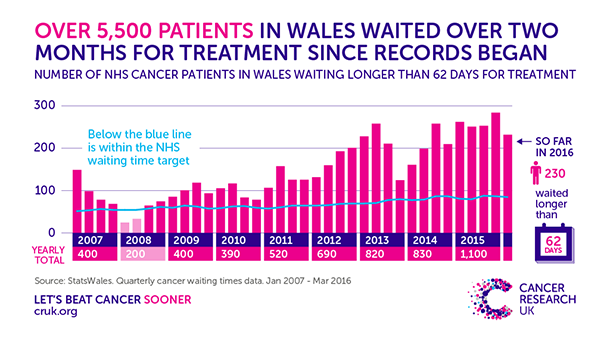 “For someone who suspects they may have cancer, waiting for news is an extremely anxious time. It’s crucial that once patients are diagnosed they get the treatments they need quickly to have the best chance of survival.

“It’s unacceptable that the 62 day target for urgent suspected cases has not been achieved across Wales in any quarter since June 2008 and the Welsh Government must urgently direct resources to help local health boards meet these standards.”

The figures for the first quarter of 2016 are slightly improved compared to the previous quarter, with 86.3% treated within two months.

The Welsh Government is preparing a new cancer plan over the summer, and Cancer Research UK has stressed that it is essential that waiting times are addressed.